NATIONAL CITY – The Port of San Diego and National City are teaming up in an effort to optimize maritime operations and encourage opportunities for commercial development surrounding Pier 32 Marina. The land use plan, which is referred to as the Balanced Land Use Plan for National City Marina District, was proposed at a San Diego Unified Port District meeting on Sept. 23 and primarily focuses on enhancing the National City Marine Terminal, however the Board of Port Commissioners also wants to boost public access to San Diego Bay.

One of the plan’s goals include improving access to the National City Adventure Center. Once completed, the center will include boat storage, kayaking, locker rooms, showers, and restrooms. Additionally, the plan proposes an increase in the size of Pepper Park, which borders the marina and features a boat launch ramp and a fishing pier. The additional 1-acre of park west of Pepper Park will directly improve public access to the Bay.

Port officials are analyzing the potential additional vehicular or pedestrian traffic that future commercial development surrounding the Pier 32 Marina could generate. The plan could cause a portion of Tidelands Avenue to be shut down, which would restrict access to Pier 32 Marina and the boat launch ramp at Pepper Park.

National City and the Port of San Diego staff are currently in the stage of discussing conceptual plans and project proposals and refined plans will be announced in the future. The Port staff has announced it will inform National City stakeholders of developing plans and next steps. 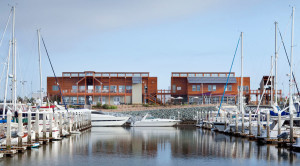